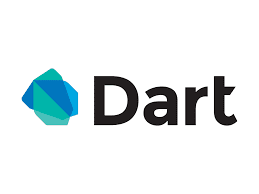 Dart is a general-purpose programming language originally developed by Google and later approved as a standard by Ecma (ECMA-408). It is used to build web, server and mobile applications, and for Internet of Things (IoT) devices. It is open-source software under a BSD license.
Dart is a class-based, single inheritance, object-oriented language with C-style syntax which compiles into JavaScript or native code. It supports interfaces, mixins, abstract classes, reified generics, and optional typing.
History:
Dart was unveiled at the GOTO conference in Aarhus, Denmark, October 10–12, 2011.The project was founded by Lars Bak and Kasper Lund.
Standardization
Ecma International has formed technical committee TC52 to work on standardizing Dart, and inasmuch as Dart can be compiled to standard JavaScript, it works effectively in any modern browser. Ecma International approved the Dart language specification first edition in July 2014, at its 107th General Assembly, and a second edition in December 2014.
Usage:
There are three main ways to run Dart code:
Compiled as JavaScript
To run in mainstream web browsers, Dart relies on a source-to-source compiler to JavaScript. According to the project site, Dart was "designed to be easy to write development tools for, well-suited to modern app development, and capable of high-performance implementations. When running Dart code in a web browser the code is precompiled into JavaScript using the dart2js compiler. Compiled as JavaScript, Dart code is compatible with all major browsers with no need for browsers to adopt Dart. Through optimizing the compiled JavaScript output to avoid expensive checks and operations, code written in Dart can, in some cases, run faster than equivalent code hand-written using JavaScript idioms.
In the Dartium Browser
The Dart software development kit (SDK) ships with a version of the Chromium web browser modified to include a Dart virtual machine (VM). This browser can run Dart code directly without compiling to JavaScript. It is intended as a development tool for applications written in this language, rather than as a general purpose web browser. There were originally plans to include Dart support directly in Chrome, but these were cancelled.
Stand-alone
The Dart SDK also ships with a stand-alone Dart VM, allowing dart code to run in a command-line interface environment. As the language tools included in the Dart SDK are written mostly in Dart, the stand-alone Dart VM is a critical part of the SDK. These tools include the dart2js compiler, and a package manager suite called pub. Dart ships with a complete standard library allowing users to write fully working system apps, such as custom web servers.

Snapshots
Snapshots are a core part of the Dart VM. Snapshots are files which store objects and other runtime data.
Script snapshots
Dart programs can be compiled into snapshot files. These files contain all of the program code and dependencies preparsed and ready to execute. This allows fast startups.
Full snapshots
The Dart core libraries can be compiled into a snapshot file which allows fast loading of the libraries. Most standard distributions of the main Dart VM have a prebuilt snapshot for the core libraries which is loaded at runtime.
Object snapshots
Dart is a very asynchronous language. With this, it uses isolates for concurrency. Since these are workers which pass messages, it needs a way to serialize a message. This is done using a snapshot, which is generated from a given object, and then this is transferred to another isolate for deserializing.
DartPad

The Dart team created DartPad at the start of 2015, to provide an easier way to start using Dart. It is a fully online editor from which users can experiment with Dart application programming interfaces (APIs), and run Dart code. It provides syntax highlighting, code analysis, code completion, documentation, and HTML and CSS editing.

For more information, please visit : www.triharisolutions.com
Posted by Unknown at 00:59